Whatever the season, the Cape Peninsula has so much to offer visitors and locals alike. I know that I've barely scratched the surface of things to do and see in this stunning and unique part of the world.

Disclaimer: According to Wikipedia, the peninsula is 52 km long from Mouille point in the north to Cape Point in the south. As a somewhat assimilated Capetonian, to me the Cape Peninsula runs from around Llandudno to Cape Point and to Muizenberg on the other side. I'm probably incorrect in my classification, but for the purpose of this post, those are the areas that will be included!


From my self-proclaimed starting point, Llandudno is a lovely secluded beach, visited mostly by surfers and local residents. It's remarkably clean, pet friendly and mostly sheltered from the wind. Parking can sometimes be tricky as the small parking lot often overflows into narrow spaces on residential roads.

Follow Victoria Road from Llandudno to the Republic of Hout Bay. I highly recommend the Hout Bay Harbour market which is open every day of the weekend (and Friday nights). Weather permitting, seal island tours depart hourly from Hout Bay harbour, about R60 for an hour trip. Watch seals cavorting in the waves against the stunning backdrop of the Sentinel peak and the bay. From here you can head to World of Birds which is good fun for the whole family. Walk through large enclosures housing many species of birds and other animals and encounter monkeys clambering on branches (and people!) around you.

The Chapman's Peak drive starting in Hout Bay is fantastic. Just be aware that this is a toll route and it may close to adverse weather conditions. Enjoy the stunning Cape Atlantic archipelago and indigenous fynbos of the area along many of the scenic stops along the way. Chapman's drive will take you through to Noordhoek, which boasts a sizeable beach and shipwreck. The Foodbarn in Noordhoek is a great gourmet bistro restaurant. Thorfynns Restaurant at Monkey Valley Resort is also a great spot for a family outing and has lovely views of the Atlantic ocean. From Noordhoek, your path may split in various directions and each holds a journey of its own.

Kommetjie lies to the south west and is a quaint town in a seemingly remote spot. On the way you'll pass Imhoff farm which offers camel and horse rides and has several eating spots. You can choose to pass through or head directly to Cape Point, which forms part of Table Mountain National Park. Those with Wild cards will not need to pay an entrance fee.

Cape Point is a great day or half day trip. There are various hiking trails across the peninsula, but for those on a tight schedule, it is easy to drive directly to the Cape of Good Hope. Stand in line to snap a picture with the sign! Drive up to Cape Point and jump on the Flying Dutchman funicular or brave the brisk walk to the top to see the lighthouse.

From Cape Point, head to Simon's Town, home of the endangered African penguin (renamed from Jackass penguin). Boulders Beach boasts a large penguin colony and visitors are able to get close to these adorable birds. Entrance to the beaches are not free, but a boardwalk starting at Boulders parking lot is open to the public. Kayaking from Simon's Town harbour to Boulders and back only takes about 2 hours and is good fun. Simon's Town is home to South Africa's Navy. The barracks and ships are quite visible in the harbour. Go on a submarine tour of the decommissioned SS Assegaai and explore this metal hulk as it sits in the water. 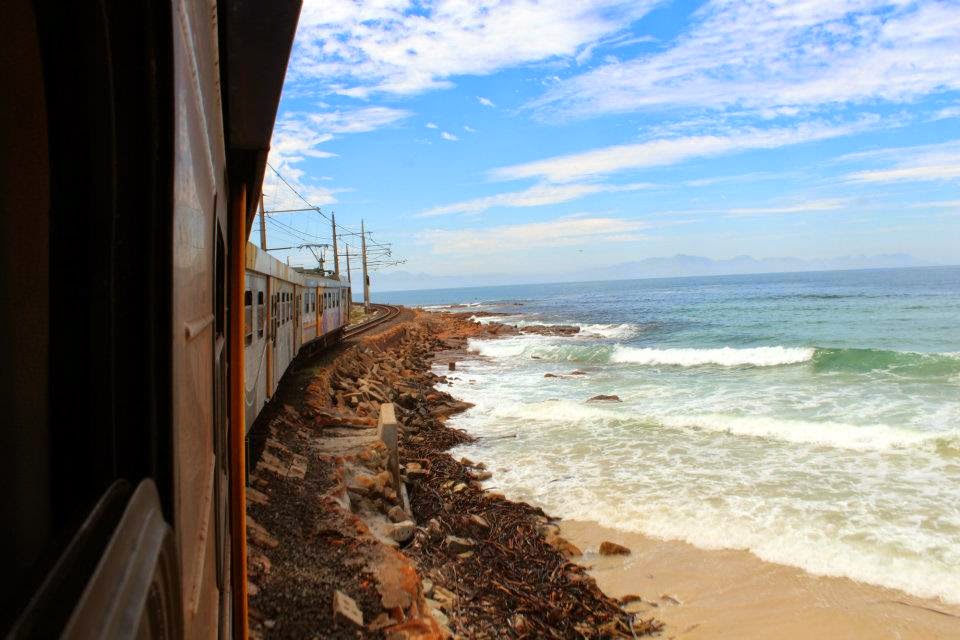 From Simon's Town you can jump on the train to Muizenberg and hop off at Kalk Bay on the way. Kalk Bay is a bustling community popular with locals and tourists alike and boasts many popular dining spots and shops. Some of these include the Brass Bell and Polana. False Bay is also good for whale spotting, typically between June and November. Muizenberg is a must for those into surfing. The beach front often boasts markets and festivals.

A mere weekend in the peninsula will not be sufficient to discover all its secrets but it surely will be more than enough to capture your heart.

PS. All photos used in this post belong to me.
Posted by CarInAPark at 04:45